Posted on October 24, 2016 by thefreerangebookclub 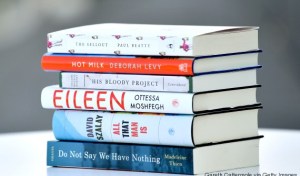 In a year in which many established authors and their highly anticipated books (McEwan, Coetzee, Barnes, Tremain to name a few) didn’t make the shortlist, nor the longlist some of them, we were expecting big things from the 2016 Man Booker. We hadn’t even heard of some of the authors but thought we must be in for a treat for them to oust some of our favourite writers.

However, prior to coming together we had both stated we felt a little underwhelmed by the shortlisters we had read so far. Perhaps our expectations were too high? Perhaps our views were stymied about what a Man Booker shortlister should be?

To figure it all out, we met in St Arnaud, the perfect hideaway for completion of our reading, conversation and blogging.

As we read more what we saw emerge was a body of work that was certainly not what we expected, but one which was pushing boundaries on the traditional form of the novel. A short story collection that is really a novel, a novel purporting to be true crime, a significantly historical novel presented in a contemporary format, a heavily satirical novel which the author says is certainly not satire, a dense character study that is almost plotless – this is the generation of anything goes and it is reflected in these, the best books of the year.

The contrasting novels from several different genres are outstanding examples of what can happen with a free-range mind! Yet amongst the risk-taking was a consensus for clear story-telling and message provision. There are few limitations on who could read and enjoy these books.

Suzy sums it up, saying:  “This is easily my favourite Bookerthon in years. 2016 has been a wonderfully plot-heavy collection of books that have all challenged and moved me in ways that has had me completely in awe of the authors’ talents. I have read books I wouldn’t normally be drawn to, but have absolutely loved. From 1860s Scottish highlands to 1980s China, not only have I been entertained but I also feel educated about aspects of society that I was otherwise ignorant about.”

So, with the advantage of hindsight, discussion and all the reading completed, here are our final thoughts.

Hot Milk was the most readable but also the least stimulating; All That Man Is provided a captivating take on the human psyche, in a unique novel/short story/novel kind of way.

The Sellout was demanding to read but that’s what made it complex and one-of-a-kind. If the author insists it’s not satire, has he created a whole new genre?

While at first it seemed the author of His Bloody Project was treating the reader like a fool, it turns out he was treating us with the utmost respect, and Eileen was a roller coaster ride of emotion and wonderment.

However, the shortlister that nudged ahead of the others for us both was the historically significant and meticulously researched Do Not Say We Have Nothing by Madeleine Thien. It was a novel designed to shock and move the reader with characters who live beyond the page. That Chinese history, music composition, complex mathematics, literature, love, loss and friendship can be written about in a universal and contemporary way, so that nobody is excluded from enjoying it, is a feat. And therefore it becomes our pick for the 2016 Man Booker Prize.