Posted on August 21, 2018 by thefreerangebookclub 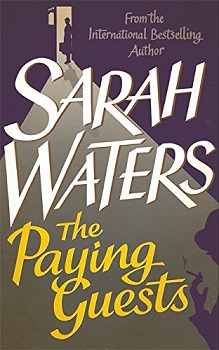 READ FOR BOOKCLUB
Chosen by Jo

A love affair and a crime amongst landladies and their tenants, set in post-war Britain.

➽ SPOILER ALERT “Sarah Waters wonderfully sets the scene with her detailed and easy-to-absorb descriptions of the physical and social environment. I really felt as if I was in that house watching in a ‘fly on the wall’ sort of a way. She slowly develops the desire between Lillian and Frances culminating in passionate sex scenes which were eye opening and so very convincing. The detail and angst involved after Leonard’s accidental killing with moving the body, the aftermath of discovery and police investigation and the subsequent trial of an innocent man were thrilling. I would say though that the book moves so slowly in the first half and then picks up considerably in the last that it seems a bit discordant – too much detail in the cleaning and relationship building between Lillian and Frances I think. The ending I have to say is a let down. There’s so much tension towards the end and then it ends in a boring, lame way. I did enjoy this story but the ending tarnished that enjoyment unfortunately.” – Jo

What did she want? Frances couldn’t tell. She wasn’t sure she cared any more. There had been too much dancing back and forth. The night had been over-stretched: it had lost its tension

➽ “The Paying Guests exhibits Waters’ usual mastery of telling a personal tale in such depth its as if the characters are living beings. It details the day-to-day interactions of a widow and her daughter with their new lodgers – ‘paying guests’ a requirement after the deaths of their menfolk in the war. There is a scandalous affair and a crime and a trial, all explored in a manner accurate for the 1922 British setting. I enjoyed the plot in the body of the work, infact I felt emotionally invested in the character’s lives every step of the way, but I did feel that Waters normally delivers more in meaning and message. And, I have to say (SPOILER ALERT) I was extremely disappointed in the ending. I had all these wild imaginings about what scandalous eventuality could occur in the final sentences, yet it was the most routine and colourless ending possible and I was hugely frustrated, especially as the book weighs in at nearly 600 pages and therefore involved some input of time and energy. I have read and loved several of her other works, but don’t know if I’d recommend this one.” – Rachel

➽ “The Paying Guests is a novel set in 1922 after World War 1. I found this novel by Sarah Waters very slow paced and a bit of a chore to read. The first half is very long and arduous with a lot of floor scrubbing and boring domesticity. During the second half we are rewarded with a taboo love affair, a murder, a courtroom drama, a lot more exciting than the fist half, albeit it still never becomes compelling enough to hook me in.” – Jodie