A Fraction Of The Whole – Steve Toltz

Posted on September 15, 2008 by thefreerangebookclub 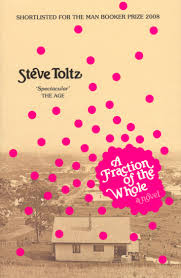 From his prison cell, Jasper Dean tells the unlikely story of how he, his scheming father Martin and his crazy Uncle Terry upset an entire continent

♥ “For most of his life, Jasper Dean couldn’t decide whether to pity, hate, love, or murder his paranoid father, Martin, a man who overanalysed everything and liked to force his self-absorbed opinions on his only son. But now that Martin is dead, Jasper can reflect on the man who raised him in intellectual captivity, and what he realises is that, for all its lunacy, theirs was a grand adventure.

“As he recollects the events that led to his father’s demise, Jasper recounts a boyhood of outrageous schemes and shocking discoveries—about his infamous outlaw uncle, Terry and his mysteriously absent European mother.

“The story takes them from the Australian bush to the cafés of Paris, from the Thai jungle to strip clubs, asylums, labyrinths, and criminal lairs, always with a set of good intentions which usually end up catastrophically. Each tale is so full it could be a novel in itself, and the result is a wild rollercoaster ride.

He pointed the gun at me. Then he looked up at my hand and tilted his head slightly.
– Journey, he said. I had forgotten I was still holding the book.
– Céline, I said back in a whisper.
– I love that book.
– I’m only halfway through.
– Have you got to the point where —
– Hey, kill me, but don’t tell me the end!

♥ “Raucously funny, A Fraction Of The Whole had me spell-bound. It’s not what I’d expect from a Man Booker shortlister but I am pleased it made the cut as it added some light-heartedness to the proceedings. There are loopy characters and purposefully overworked plot lines and everything spirals together until it is all so ridiculous you just have to read on to find out what’s going to happen!” – Rachel