Posted on October 12, 2007 by thefreerangebookclub 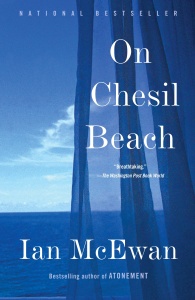 In this novella a newly married couple reflect on their pasts and as a result question their marriage while honeymooning on Chesil Beach.

⚈ “The opening line of On Chesil Beach sums it all up really: ‘They were young, educated, and both virgins on this, their wedding night, and they lived in a time when conversation about sexual difficulties was plainly impossible.’

“It is 1962, the cusp of the sexual revolution, and two very English characters are contemplating the role of sex in their newly declared marriage. There are many factors that contribute to their differing views, not contained to the time and place, but also societal class systems and other goings on. The setting is certainly alive and relevant in this book.

“However, while I am an Ian McEwan fan of the highest order, On Chesil Beach left me wanting. There was his usual mastery of prose but somehow it seemed too easy. I’m being critical, obviously, because even a bad Ian McEwen book would be better than most texts on the bookshop shelves!, but I guess being the huge fan that I am means I am being extra tough on him. Don’t get me wrong, it is still a great read, I just didn’t feel overwhelmed with fervour and emotion as I have with his other masterpieces.” – Rachel